This is the LEPIN 16014 – Space Shuttle Expedition Real Reviews from our lovely customer Marcel Koehler at Germany.

There it is, the report on the set:

Why did I buy this set?
Of course, this set is also a set for people with space problems!

On a relatively small base plate, you get this relatively pretty part set up. In addition, that is sometimes a set with a relatively high degree of popularity. The x-spaceship from the Star Wars series does not make any impression on non-Le..g0-affine friends and acquaintances (yes, should it exist), but a Space Shuttle knows them all …

Especially the large parts have a really nice surface on which I could not immediately discover any major quirks or scratches.

Since I’ve seen quite different sets … I have partially after I had touched the large parts with my fat fingers, the stones with a cloth wiped again!

Of course, I can not say if all sets are like my set, but here the quality of the stones is really great!
I then sorted all parts and distributed them on 3 sorting boxes and a tray.

The setup went very fast from the hand, otherwise, I’m not really the speed-builder, but here you could almost see how the space shuttle grows. After my black phase (Tower of Orthanc & Tumbler) then WHITE stones are also a welcome change.

I did not stop building time! The whole part is relatively simple, the manual really good and the few technical parts, such as suspension, have been installed quickly.

Something tricky the flaps have been from the shuttle, the stability is not soooo awesome and when opening and closing the flaps you have to see if all parts stay in place.

In the instructions, there is also at step 48 a kg. Error, there is 2 x kg. half bows indicated, but def. be big bows. These are also available, so no problem.

The construction of an external fuel tank and the two booster rockets were then, thanks to large parts, very fast.

The landing platform and the satellite (hidden in the shuttle) was then only a finger exercise at the end.

End the part is then on the launch pad! The spotlights would have to be replaced by real lights and then a bit more smoke and then you have Cape Canaveral for home! The countdown has started! As I said, on a relatively small footprint a relatively large set! The minifigures do the rest, very good quality! 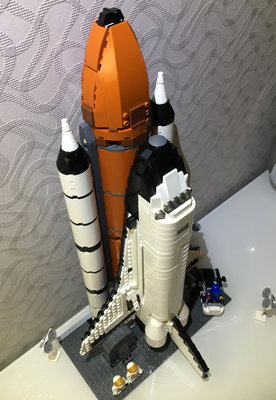 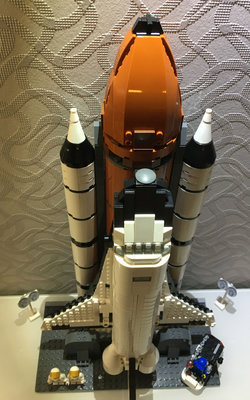 Basic quality, errors, missing parts:
The quality of the stones from this set needs def. not to hide behind the original on Denmark. Basically good clamping force, no defective parts, no (!) Missing parts!

But I have one problem: the stickers! Unfortunately, the leaflet with the stickers did not make it to me unscathed. Unfortunately, the thing was kinked a couple of times and 2-3 stickers have come off. Therefore, I have not attached any stickers on the finished set. I’ll take a look at that again, maybe I’ll leave it that way too, I like it quite well even without a sticker!

Conclusion:
A very nice set, not only to put it on the shelf, as a playset, the thing sure makes a slim foot!

Of course, the set is not the most sophisticated set, by construction, but it was fun and that’s what matters in the end. I’ll give you 8 out of 10 points. There is a slight point deduction for the flaps to the load compartment, also there I have to look again on occasion if I can possibly change something there. Basically, I give for this set a clear buy recommendation. Anyone who has something to do with space travel does not always want to have only Star Wars and also has space problems: STRIKE!

and a few more pictures: 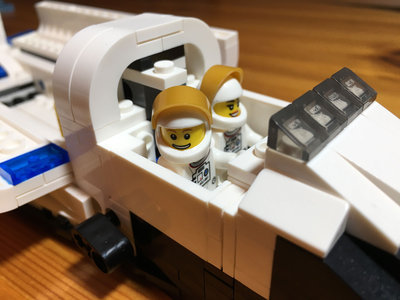 and the final parking position in my man-cave: