This is the LEPIN [] Lepin 16050 – Old Fishing Store Real Reviews from our lovely customer nickname Niklas Osterhagen at Germany.

I also mention here again. For “me” it is the best quality Lepin set I have.
All stones are stuck. These include 1er plates and tiles.
However, the doors have now been spoiled. When closing, they bend slightly. So that means the cams are too big or the doors too long and do not fit 100% in the frame.
All construction phases were counted very accurately. Not a single part was left over after the respective construction phase. Incidentally, no one was missing. The small spare part bag will remain unopened.

Since GGAM has not included any instructions, I had to resort to the L3GO pendant and can thus confirm that everything can be 100%.

The building is built very solid, but unfortunately also implemented a bit wasteful. One could well have built a wine cellar/treasury or other in the back.
Ansich it is very detailed equipped. Almost overloaded for my taste.

What I do not like is the chimney. This is just on the plate diagonally in the installed state. Straight up I would have found personally successful.

There are only a few printed parts. The name tag, and the usual …. money, murals, cards …
It means in reverse …. so there are some stickers. These are of good quality and delicately translucent.
The respective part colors were not quite hit. But I almost think that it will be similar to the Danes.

Here is the substructure. I think super substructure made of wood. You can see them later only through the site.
Theoretically, the rear part would be “walkable”. In my opinion, unfortunately, a little wasted space. Here I would have found a wine cellar, an old pirate’s treasure or fish storage appropriate.
Well, I also think the indicated rock formations. 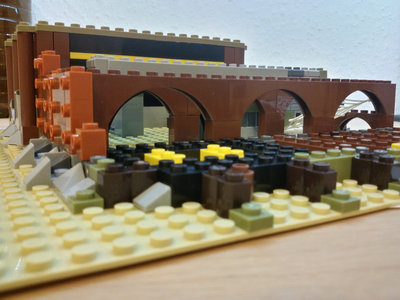 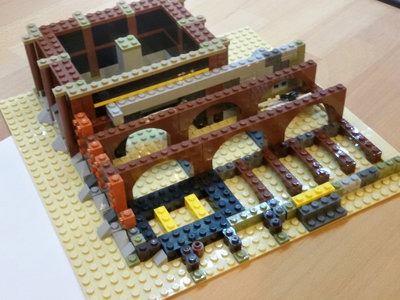 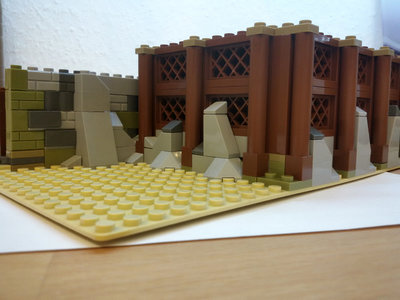 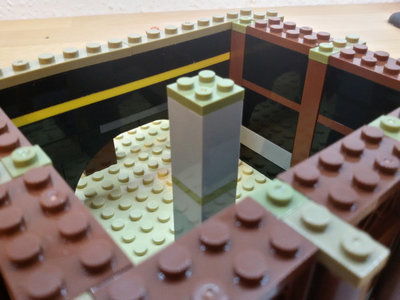 Here are the pictures after step 2. It will be colorful. different wood tones …
The lower tiled level bulges a bit. In the later course of the construction, you hardly see it.
It may be because there is a small cavity on the left. 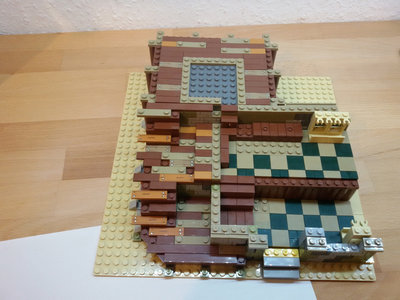 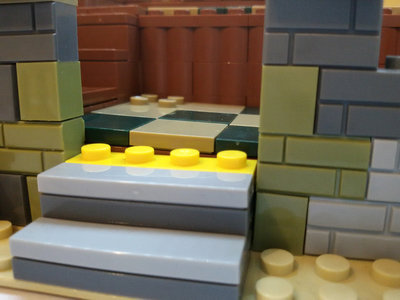 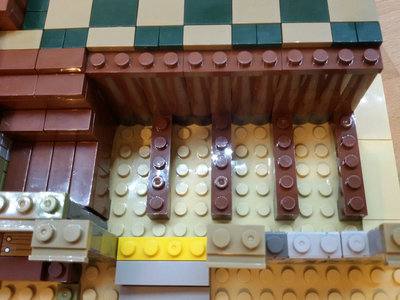 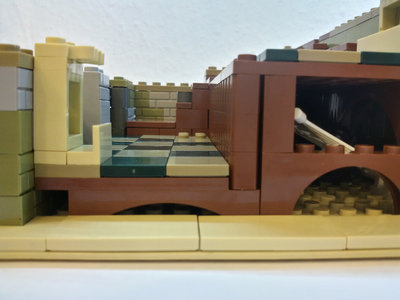 The interior is created. To get back to the title theme … would not have been here 1.er tiles are used, but 1×2 or the triangular.
The folding lower wall was also colorfully designed.
Slowly also the outer detail-rich takes shape.
Anyone who has not received a rotary worm in modular construction yet will get their money’s worth here.
The stone rows and the later Verplankung let the model rotate continuously. Personally, it annoyed me a bit. 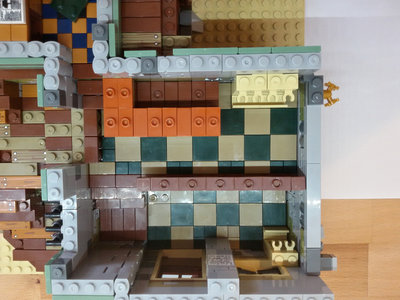 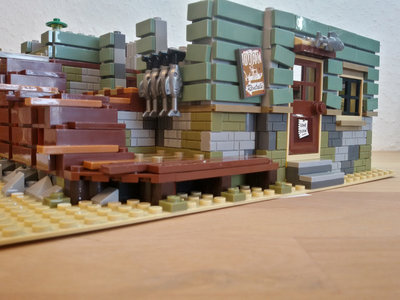 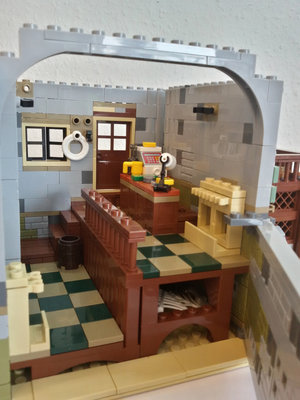 The interior is growing slowly. For the upper part of the building is quickly increased. Everything first without planking.
Meanwhile, the upper balcony with its wooden pillars is completed. 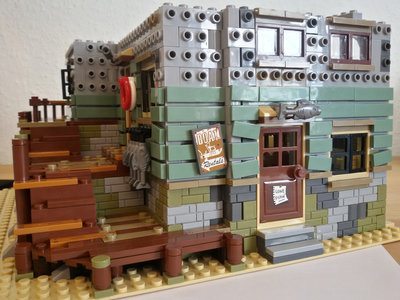 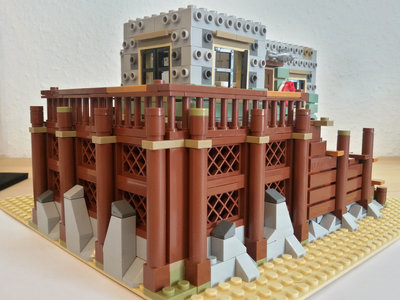 The fishing shop was lavishly equipped. Since there are still the 3 fish boxes are housed, I think the whole thing is almost overloaded. But also very detailed. 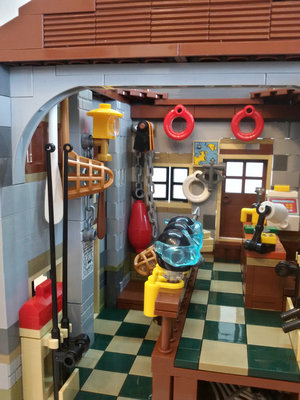 Here is already the 2 folding door and he gable finished. Then there is again rotation with the planking. 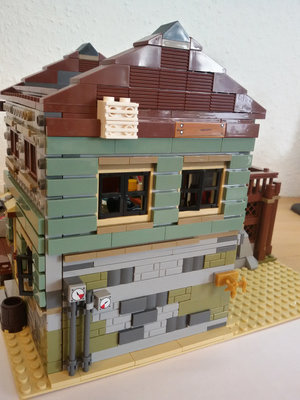 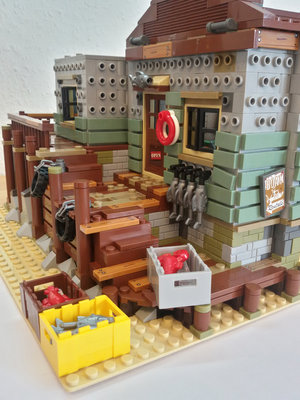 Here again a picture in the fishing shop. 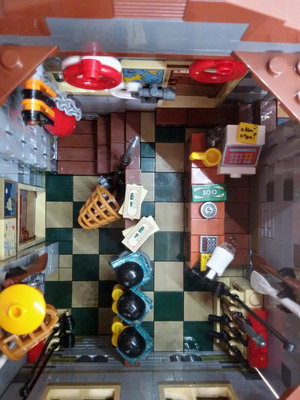 And here you can admire the detailed roof. As I said. The chimney is inclined later. If you could have made mMn better. Subsequently, the construction of the small tower with weathercock and telescopes took place.

On the whole, I’m very happy.

Currently, it’s “fitting” here. Whether this is such a good idea, time will tell. Apart from that, you could expand with time by a small boat and sea/sea.

So. More I just can not think of. Except for the transport due to some parts have scratches. 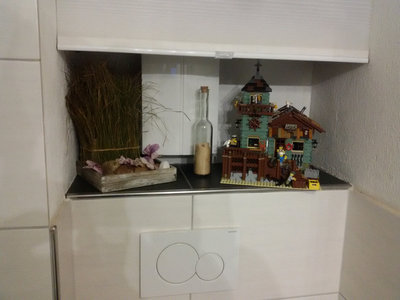