This is the LEPIN 31001 – Scorpion Pyramid Real Reviews from our lovely customer nickname Florian Neudorf at Germany.

I had the set in my shopping spree at 11.11. ordered and had yesterday finally made the long and arduous journey to me.

It was probably because of the 3D plate in a neutral, white box.
This set of plays is, therefore, something special for me since I had almost all sets from the 1998 series “Egypt” of the adventure theme in my childhood. The highlight of my collection at the time was the Sphinx, only the Temple of Anubis and a few smaller sets were missing. At that time I would have liked a pyramid, but unfortunately, the Danes did not design it. Nevertheless, I like to remember the many hours in which I listened to the accompanying radio play with my friends and followed the events with the characters.
In 2010, Le..g0 apparently answered my request and reissued the topic, this time with a corresponding pyramid. While rival research teams had to survive in 1998, the protagonists in the new series “Pharaoh’s Quest” have to fight against cursed mummies and giant animals.

During the construction, I did not take any pictures, because it was quite easy to do – the construction manual is large and clear, the structure itself for each terminal block to accomplish and exceptionally missing some parts (but two parts had the wrong color). The quality I think is very good, but I can not make a direct comparison to Le..g0, because I only have the Lepin version. 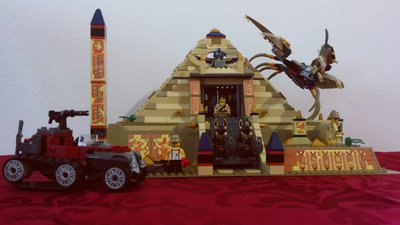 The set in all its glory

Here is a beautiful pyramid with some game features that work well, a giant scorpion, seven figures and a vehicle offered. 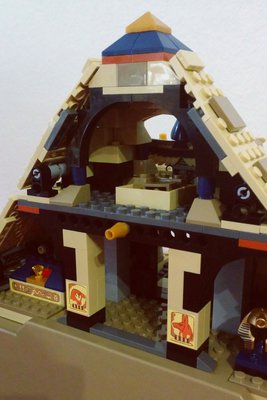 View from behind in the inside of the pyramid

The game features include a mechanical door, a fold-up staircase, a trap door with falling stones, and a lever-arched wall with a sarcophagus display.

I do not want to say much about the characters. They are very close in design to those of 1998. However, the Anubis guards and the winged mummy are really well done. Also included were two red snakes, a green snake, three black scorpions and a few “Lepin coins” (very far from the original).

Also, my previous experiences (based on Star Wars) like “Lepin can stone, but not figures” I have to rethink this set again because the characters have become really good. A single Anubis guard I had previously bought at another dealer, the comparison can be seen in the following picture: 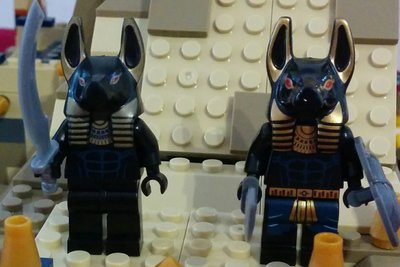 The golden print looks much nicer with the figure and also the legs are printed.

The Halbkettenfahrzeug looks in my opinion very chic. 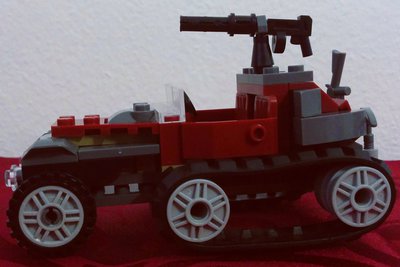 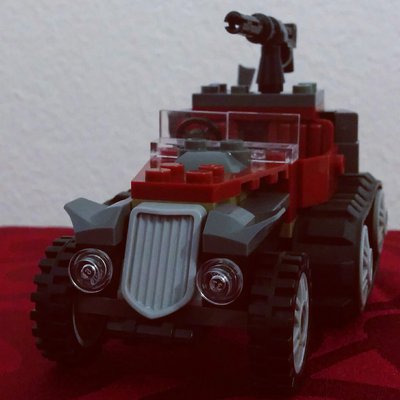 The wheels look better with the Lepin variant, as spokes can be seen here. There are no spokes on the Le..g0 version (only photos available). The rubber of the chains is soft, only the shape does not quite fit. 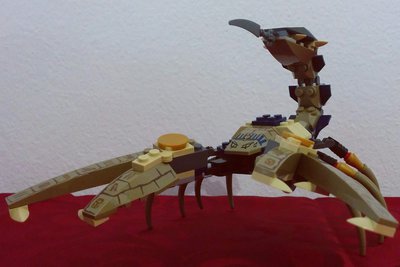 Personally, I would not have needed the scorpion now. The scissors are made quite well, but I find the legs poorly implemented.

Conclusion: If I draw a comparison to the initially mentioned sphinx, then you can quickly see the strengths and weaknesses of this kit:
+ The figures look good and are also numerically represented.
+ Of course, the color scheme is mostly tan, but there are some dark blue and gold accents, and tan is also lighter and darker. That provides a variety.
– Sticker! In 1998 it was still bothering to print all hieroglyphs on the stones. There were very few stickers back then. But with this set, you really have to stick everything on.
– The 3D-plate has become good, but uniform in one color. To make it look a little like Egypt, you have five stickers stuck on it. That looked much nicer in 1998, but it’s also an opportunity for people who want to use the record for a different model.